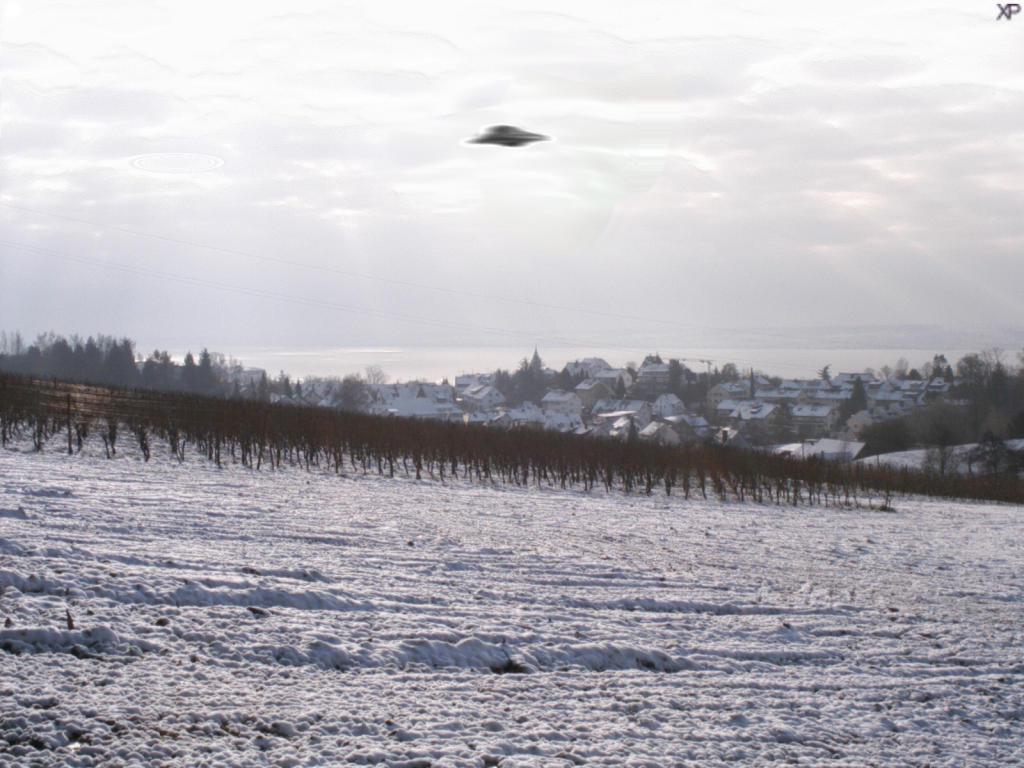 The holidays were a strange time for those who lived in Rendlesham Forest, Suffolk, England in 1980. The area was steeped in lore and controversy as a few UFO sightings plagued the area during the month of December. The storied history of this mystery will be adapted for the small screen by Sony Television.

The strange occurrences, reported by American Air Force personnel, are thought to be “England’s Roswell,” referring to the famous 1947 incident where a small alien craft was thought to have crashed in the New Mexico desert. The most common theory among believers is that the US Government recovered bodies and covered up the crash, claiming it was a weather balloon.

On December 26th, 1980, Air Force servicemen claimed to have witnessed a moving metal-colored object lined with what resembled flashing holiday lights, zooming through the woods near the base. The mysterious “vehicle” was disturbing the cattle and sheep on a nearby farm.

The still-unidentified object left an imprint on the ground of the forest that seems to be in the shape of a triangle. Shrubs were disturbed, branches were broken off trees, and some of the area’s surface had been burned. A picture of the scene later surfaced: 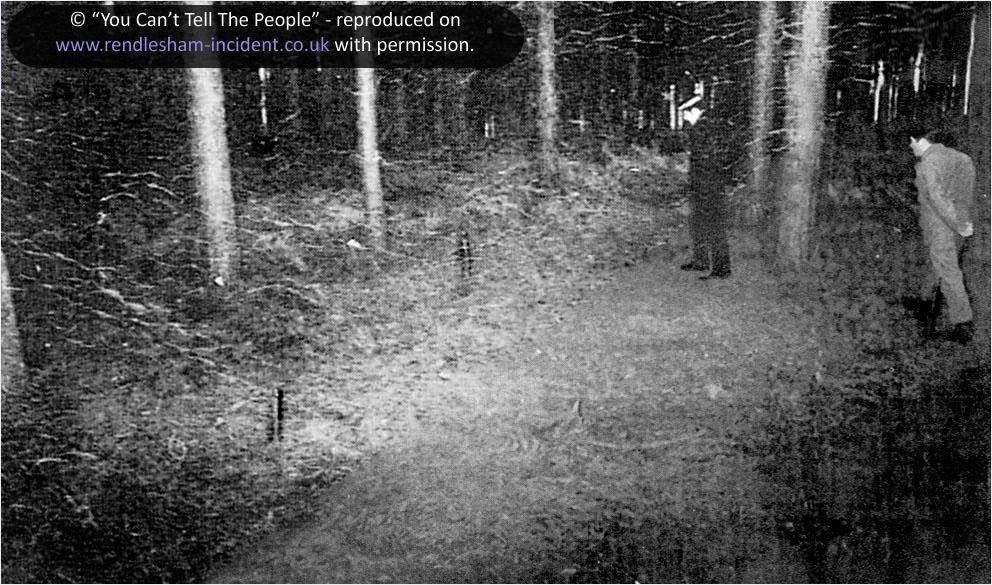 “This photograph, taken by Master Sergeant Ray Gulyas and unearthed by researcher Georgina Bruni, shows PC Brian Cresswell of Suffolk Police examining a triangle of marks with Capt. Mike Verrano in Rendlesham Forest after daybreak on the morning of 1980 December 26, just hours after the famous UFO encounter by Jim Penniston, John Burroughs and Ed Cabansag. The three marks had been interpreted as landing marks and each was identified with a stick on its outside. The rightmost stick is difficult to see but is in fact next to Verrano’s leg; a smaller mark near the centre of the picture is sometimes wrongly identified as one of the landing marks. North is to the left.” Visit the  source page for more.

One of the primary witnesses at RAF Woodbridge, a Royal Air Force base being used by the United States Air Force at the time, was Lieutenant Colonel Charles I. Halt, and he claimed to see an object that didn’t resemble any human spacecraft known. 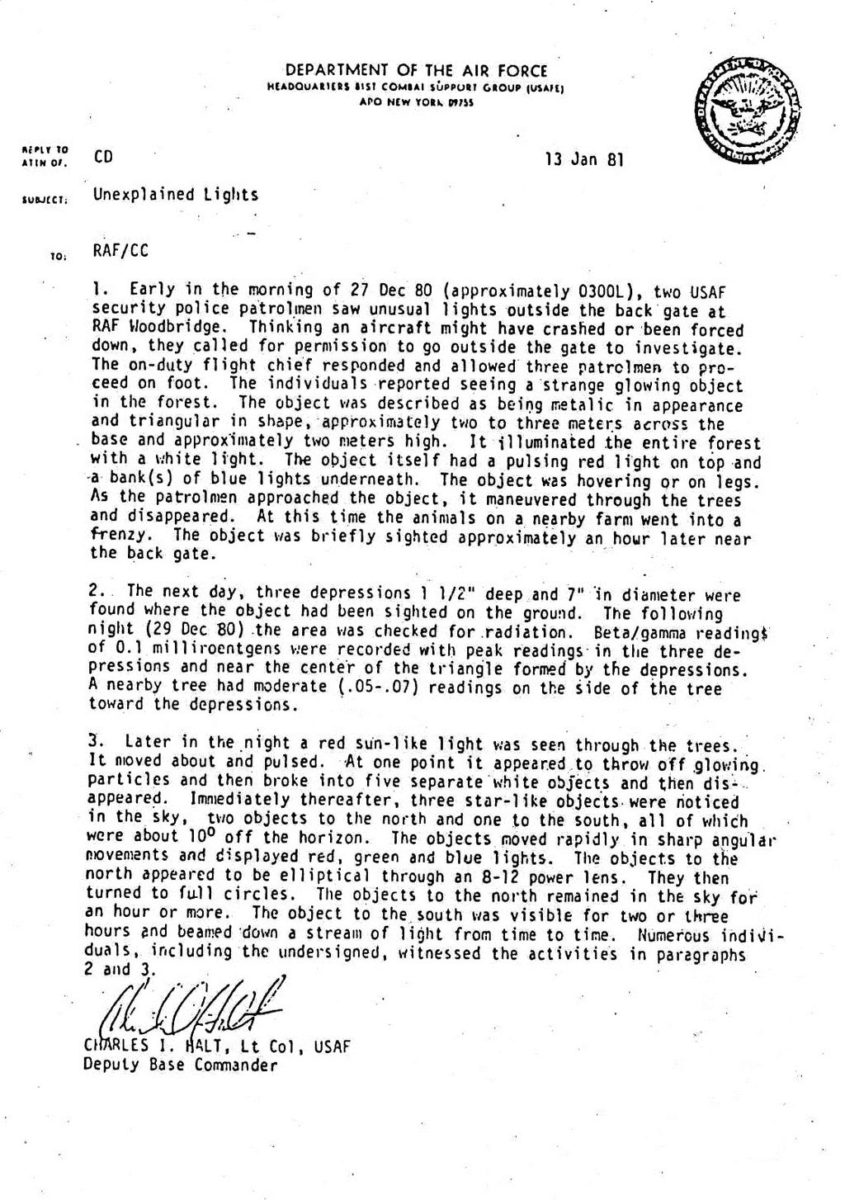 As you can tell, the story is sure to make for intriguing and compelling television. After all, it is the most famously reported UFO incident in England and a pretty well-known mystery around the world. The plot will be driven by a “complex family drama” according to Variety, who originally broke the story, and will be set against the backdrop of the Cold War. The story will be set during the time of the incidents in Rendlesham Forest and in the year 2020 during its 40th anniversary.

Below, we included the transcript of a recording of Lieutenant Colonel Charles I. Halt describing the incident on tape. It was transcribed by researcher Ian Ridpath, a well-known investigator of the Rendlesham Forest UFO sightings. You can visit Ridpath’s website dedicated to the incidents here and get some much-needed background for the recorded conversation below.

HALT:    150 feet or more from the initial, or I should say suspected, impact point. Having a little difficulty; can’t get the Light-all to work. Seems to be some kind of mechanical problem. Gonna send back and get another Light-all. Meantime we’re gonna take some readings with the geiger counter and chase around the area a little bit waiting for another Light-all to come back in. [IAN’s NOTE: For more on the geiger counter and a discussion of the significance of the radiation readings, see here.]

HALT:    OK, we’re now approaching the area within about 25, 30 feet. What kind of readings are we getting? Anything?

HALT:    Where are the impressions?  Is that all the bigger they are?

HALT:    Can you read that on the scale?

NEVELS:    Yes, sir. We’re now on the five-tenths scale, and we’re reading about third, fourth make [? – perhaps he meant to say “mark”] over…

RADIO COMMUNICATION (BUSTINZA?):     Do you happen to have a Light-all?

HALT:    I can read it now.  The meter’s definitely giving a little pulse.

HALT:   I was gonna say let’s go to the centre of the area next and see what kind of a reading we get out there.  You’re reading the clicks, I can’t hear the clicks.  That about the centre, Bruce?

HALT:    That’s the best deflection of the needle I’ve seen yet.  OK, can you give me an estimation.  We’re on the point five scale…we’re getting…have trouble reading…

NEVELS:    We’re getting right at a half of a millirem.

HALT:    This is out toward the number one indentation where we first got the strongest reading.  Yeah, it’s similar to what we got in the centre.

NEVELS:    …right in the pod, it’s right near the centre.

ENGLUND:    This looks like an area here possibly that could be a blast…it’s in the centre of the triangle…

HALT:    It’s hard to tell… Here take this, my fingers [are] about to freeze.

HALT:    Seven tenths? Right there in the centre?

ENGLUND:    Uh huh.  [IAN’S NOTE: this is the second time they have checked the centre; no ‘jump’ in the readings was mentioned the first time.]

HALT:    We found a small blast – what looks like a blasted or scruffed-up area here.  We’re getting very positive readings.  Let’s see, is that near the centre?

ENGLUND:   Yes, it is.  This is what we would assume would be the dead centre.

NEVELS:    Picking up more as you go along – the whole area here now…

A FEW CLICKS ARE AUDIBLE.

HALT:    Up to seven tenths?  Or seven units, let’s call it, on the point five scale.  OK, why don’t we do this: why don’t we make a sweep – here, I’ve got my gloves on now – let’s make a sweep out around the whole area about ten foot out, make a perimeter run around it, starting right back here at the corner, back at the same first corner where we came in, let’s go right back here.  I’m gonna have to depend on you counting the clicks.

HALT:    …then I can put the light on it and sweep around it.

HALT:    Put it on the ground every once in a while.

ENGLUND:    This looks like an abrasion on the tree…

ENGLUND:    We’re getting interest right over here. It looks like an abrasion pointing into the centre of the…

HALT:    It may be old, though – there’s some sap marks or something on it.  Let’s go on back around. All right?

NEVELS:    …give some extension on it…

NEVELS (indistinct):   …carry…about my ears, but this one broke…

HALT:    Are we getting anything further?  I’m going to shut the recorder off until we find something.

[IAN’S NOTE: Another remark to suggest that Halt is still not greatly impressed by what they have found so far. Note that there has been no mention of the UFO which Halt was originally called out to investigate.]

HALT:    Picking up?  What are we up to?  We’re up to two, three units deflection, you’re getting in close to one pod.

NEVELS:    Picking up some here…picking up.

NEVELS:    Picking up more, though – more frequent. Closer together.

ENGLUND:    Each one of these trees that face into the blast, what we assume is the landing site, all have an abrasion facing in the same direction, towards the centre, the same…

HALT:    That’s interesting.  Let’s go the rest of the way around the circle here.  Turn it back down here.

NEVELS:    Picking up some…

HALT:    Let me see that….that’s got a funny…that’s… You’re right about the abrasion.  I’ve never seen a tree that’s er…

SOUNDS AS THOUGH THEY ARE TAKING SAMPLES 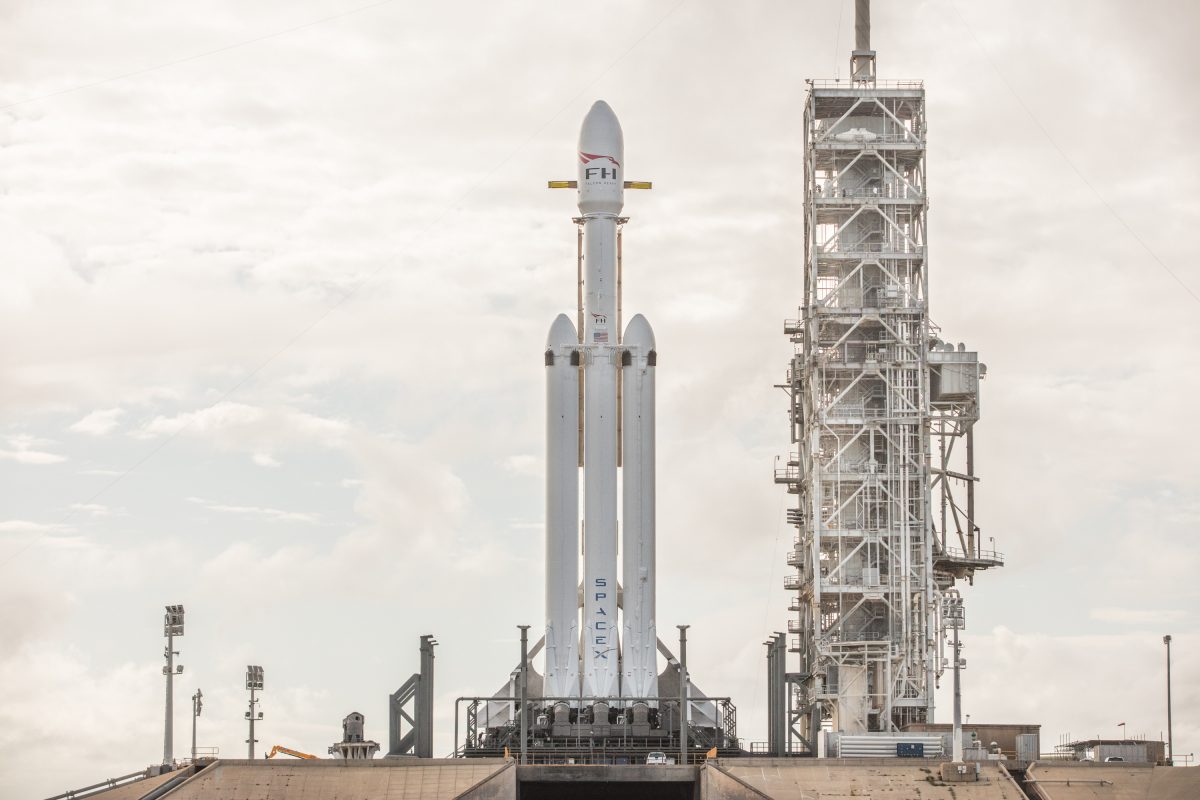 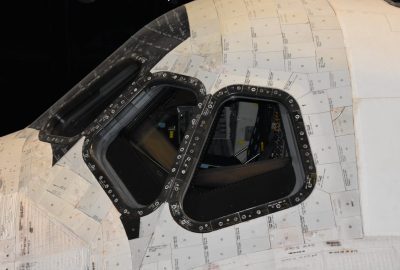